The Palace of Westminster and its Hostelries: the Evidence of John Wilkes’ Diaries

John Wilkes’ involvement with Parliament spanned over thirty years. For a proportion of that time he was barred from the chamber but that did not prevent him from continuing to feature in the life of the Commons (and occasionally the Lords). When he finally retired from Parliament in 1790 he was (as he once said of himself) “an extinct volcano” but even at this late stage of his career he remained a controversial and lively figure.

Wilkes was born in Clerkenwell in 1725 to a prosperous distiller, Israel Wilkes. Although the second son and afflicted with a pronounced squint, Wilkes’ parents resolved to set him up in life as a gentleman. His education was rounded off with a stint at the University of Leiden and on his return a marriage was arranged for him with a wealthy heiress, Mary Mead. Through her he acquired the status of squire of Aylesbury and decamped from London to his new residence in the centre of the town, the Prebendal House. In Buckinghamshire Wilkes was introduced to the world of high politics. He became acquainted with the local MP, Thomas Potter (the rakehell son of the Archbishop of Canterbury) and the Grenville faction centred on the seat of Earl Temple at Stowe.

It was through these new companions that Wilkes made his break into Parliament courtesy of an electoral pact. Potter resigned his seat at Aylesbury to take up a safer (or at least cheaper) one at Okehampton vacated by William Pitt the Elder, who in turn removed to Bath. This left Wilkes free to contest Aylesbury and in the summer of 1757 he was returned to Parliament, taking his seat for the first time towards the end of that year.

For the next few years Wilkes was a frustrated figure in the House. He spoke poorly and was rebuffed from various attempts to secure a lucrative office that might offset the enormous expense he had been put to in getting elected. The advent of the ministry of George III’s favourite, John Stuart, Earl of Bute, offered Wilkes a way out of his quandary and in 1762 he launched (in partnership with the clergyman-poet Charles Churchill) the North Briton, a newspaper committed to attacking both the ministry’s policy of disengaging from the Seven Years War and Bute in person. Even when Bute resigned in 1763, Wilkes continued his tirade and in No. 45 published a notorious issue that reflected on the king himself as well as persisting in its condemnation of government policy. The result was a botched attempt by the ministry to silence Wilkes by prosecuting him for seditious libel, which in turn proved the genesis of the slogan “Wilkes and Liberty” and the beginnings of a wider popular movement seeking reform.

Although Wilkes was successful in countering the government’s first efforts to prosecute him, subsequently he faced assault on a number of fronts. The Commons overturned his claim to parliamentary privilege (which had been the basis of the prosecution collapsing), while the Lords moved against him for the publication of an obscene libel: a pornographic skit on Alexander Pope’s Essay on Man called the Essay on Woman. Towards the end of 1763 Wilkes was also seriously injured in a duel with fellow MP Samuel Martin, who had been one of a number of ministers personally attacked by the North Briton. By early 1764 Wilkes was in exile in France licking his wounds. On his return in 1768 he was elected for Middlesex but promptly gaoled for 22 months in satisfaction of the previous judgements against him.

On Wilkes’ release from prison just under two years later he began a skeletal diary, listing his companions at dinner each day and his journeyings around the country. They cover the period of his campaigns in the City of London, crowned by his election as Lord Mayor in 1774, his re-election to Parliament the same year, his actions in the Gordon Riots and later role as City Chamberlain. The entries are Spartan but they help illustrate the world of this lively politician and in particular his haunts in and around Parliament and the City of London. 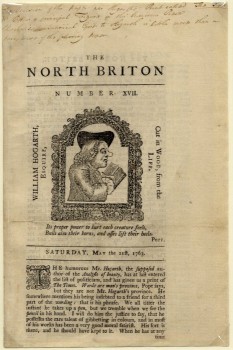 It is hardly surprising that the hundreds of MPs, peers and bishops and the staff of Parliament needed refreshment during their long sittings during parliamentary sessions. When Parliament had convened in Oxford in the mid-17th century, provision was made in the Bodleian Library, where the Houses were accommodated, for coffee stalls to be set up on a temporary basis. In Westminster such facilities might be similarly ad hoc but there were also more established outlets and Wilkes’ diaries provide a glimpse of both. In February 1775, for example, he noted dining at “the Coffee House near the House of Commons’ on two occasions. He used the same description the following month but also noted being at “the Coffee House in the House of Commons” later in March. In April he dined “in the room over the House of Commons” and he used the same description again later that year in October and on numerous occasions in subsequent entries. By this he might have meant the gallery above the Commons where guests were sometimes permitted to visit and where perhaps temporary tables and hasty suppers might have been served for the Members as well.

Besides references to what may have been relatively flexible establishments providing refreshments in rooms adjoining the chambers, Wilkes also resorted to more established coffee houses in and around the palace. In February 1774 he was at the Parliament Coffee House and the following year at “the Coffee House near the House of Commons”, which may well have been the well-known Alice’s. He refers to an occasion at Alice’s overtly in May 1777, and on several other subsequent occasions. In addition to these he was also to be found at various resorts in New Palace Yard.

Pieced together, Wilkes’ movements over the years that he was engaged in Parliament help to illuminate how Members spent their time when not engaged in debate and where they might be able to find a quick supper in between sessions. Some of the places he notes are well-known, others open to interpretation. Taken as a whole they help to illustrate a busy man, always surrounded by friends or allies, and a familiar figure in and around the old Palace of Westminster.

The Diaries of John Wilkes, 1770-1797 edited by Robin Eagles has recently been published in Volume 49 of the London Record Society Series. The original manuscript is held in the British Library: BL Add MS 30866.