Former Director of the Parliamentary Archives and Chair of the Executive Board.

One of the most dramatic paintings of the ruins of St Stephen's following the fire of 16 October 1834 is George Scharf's Panorama of the Ruins of the Old Palace of Westminster. Born in Bavaria in 1788, the topographical artist emigrated to England in 1816 to pursue his career yet seems never to have sold a single painting during his lifetime. Instead, he was content to produce drawings for scientific bodies and journals, and expensive hand-coloured prints. His best-seller was an engraving of the giraffes at London Zoo which in 1836 sold 500 copies in just two weeks.

Some forty-four artists are known to have created pictures of the fire and its aftermath. Scharf’s journal for 1834 tells how a few days after the disaster, when the ruins on the ground of Parliament became too dangerous to sketch, he went up onto the lead roof of Westminster Hall, which had miraculously escaped the fire and began to work on a panoramic view. He became so engrossed when darkness fell and he tried to leave, he found that he door through which he reached his vantage point had been locked. Shouts for help finally resulted in his rescue over the rooftops, down a ladder, and through the house of the Yeoman Usher of the Exchequer, William Godwin. Mrs Godwin was highly amused with the adventure and told him he was welcome to use their house as a thoroughfare at any time. Accordingly, almost every day for the next three weeks he did just that to go sketching on top of the Hall, and on at least one occasion he took his wife Elizabeth and a party of friends with him to see the view. His sons accompanied him sometimes and George junior (later the first Director of the National Portrait Gallery, and knighted) produced his own watercolour of the scene. 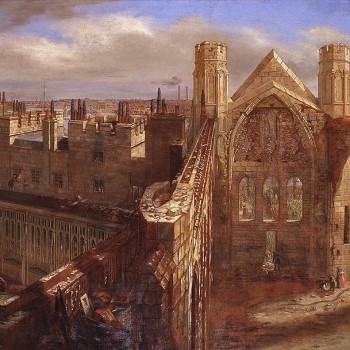 The immediacy of Scharf’s painting is evident. There is still a fire engine working with a crew in the Cloister (the burning embers continued to be damped down for five days after the catastrophe). An abandoned firehose lies on the ground within the ruined chapel. Salvaged items are propped up in the parapet guttering, while dazed Palace residents gaze out of windows and quietly explore the destruction of their home. The impact of the newly-revealed gothic architecture of St Stephen’s on contemporaries was immense, and sparked a national debate not only about their future but also about the style in which the new Palace of Westminster was to be rebuilt.

The final watercolour was huge: about 10ft long by 2ft 6 inches painted in halves on paper, pasted onto canvas and then joined together to form a diptych. In the manner of contemporary panoramic attractions, such as that at Regent's Park, it was designed to be curved round the viewer to offer what today we would call a virtual reality experience. The painting was finished on 30 March 1835, just in time for the New Water Colour Society’s annual exhibition at Exeter Hall in the Strand. It was well received in the papers and Scharf, very proud of his latest work, proposed a giant print version, to be sold the price of £1 plain or £2 coloured and advertised by propectus. Its odd perspective was due to the flattening effect of what was intended to be a semi-cylindrical work of art. However, it received only one person willing to subscribe to it at Exeter Hall, but when hung in a temporary Committee Room of the House of Lords it received 10 names, including the Duke of Wellington and Charles Barry, about to become the architect of the new Palace of Westminster. This commercial wheeze also failed but he continued to exhibit the giant watercolour at every available opportunity. It was auctioned at Christie’s shortly before he died in 1860 and sold to a Mr Palmer of 12 St James Place for £2 10s.

Today, the left-hand (northern) half of the panorama survives in the Parliamentary Works of Art collection as WOA 3793, but the right-hand side showing the ruined House of Lords chamber, where the fire originated, and Westminster Abbey has not come to light. Do you know where is it? If so, we would all love to hear from you…