Public Engagement and Parliament in the Making Exhibition 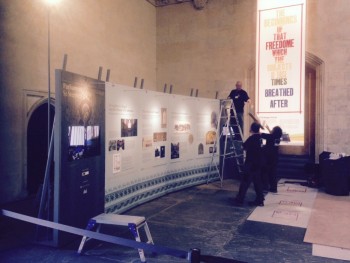 As I entered Westminster Hall - the temporary home of the St Stephen’s Chapel exhibition - for the first time, I was immediately dwarfed by the sheer size of the space. The lofty six-hundred-year-old hammer beam roof and beautiful stained glass windows certainly make an impact. It’s easy to see why the space was used as the Royal Court for so many years - it conjures up all that is associated with the monarch: majesty, power and grandeur.

This would be my home for the next few weeks as I undertook my role as an intern with the Virtual St Stephen’s Project. My brief was to present the Project to the public and gather information about visitor engagement and their interaction with the exhibition. I also sought to gauge the overall impact of the exhibition on their understanding of St Stephen’s Chapel and its importance to the political, social and religious history of the UK. 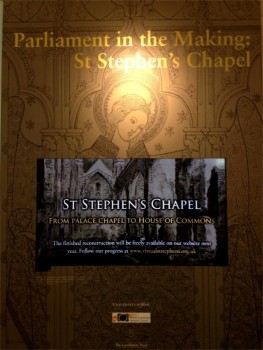 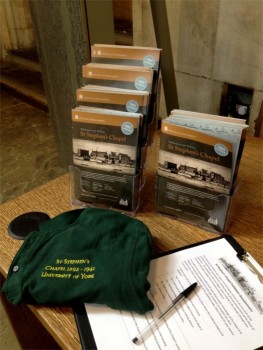 With our exhibition located in a tiny corner of the Hall, I remember thinking: how would we stand out and draw people in? How would we engage them in the rich history that St Stephen’s had to offer, and could I do justice to the project? After all, it is easy to see how the importance of St Stephen’s could get lost in a place as vast as the Palace of Westminster. 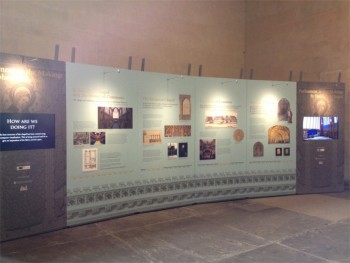 However, it soon became apparent that the design and colour of the exhibition panels, along with the video detailing the virtual reconstruction, were eye-catching enough to spark interest. This coupled with the fact that over five hundred people passed through the Hall each day, afforded me an exciting opportunity to engage with people from all walks of life. Every day I got to meet new people; from tourists visiting from Japan and India and school children visiting from Blackpool or the Midlands, to RAF soldiers, members of the public, a few Lords and the occasional MP.

This presented a unique challenge as I soon realised that very few people had prior knowledge of St Stephen’s Chapel, and those who found it a familiar name, were more than likely referring to the current St Stephen’s Hall, which came seven centuries after St Stephen’s Chapel was built. To overcome this hurdle I found that it was easiest to walk and talk, taking the visitors up into St Stephen’s Hall whilst explaining the architecture and history of the Chapel and its different uses over time. Standing in St Stephen’s Hall with the tour groups lined up on the seats facing each other, it was easy to imagine how the space would have been used when it was once the House of Commons (not to mention how cramped it must have been!). 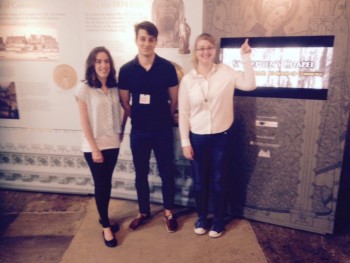 For many of the visitors, this was their first time at the Palace of Westminster and it was a privilege to be able to share with them this part of British history and to learn from them how they felt about the Project and its importance. I lost count of the number of times the exhibition was hailed as “very interesting and informative”, “jolly good” and “a real surprise”.

The project was full of unforgettable moments and memories; from the hours spent designing a project polo shirt (who knew it could be so complicated!), to the fascinating tour we were given of the Palace complex prior to starting work on the project (so much gold!). The many rewarding comments and thanks from visitors were very heart-warming, and to top it all off, we were treated to a stunning choral performance in St Mary’s Undercroft.

Parliament in the Making: St Stephen’s Chapel runs until Saturday 28 November and can be visited during the Palace of Westminster’s public opening times (Monday to Saturday, 10.00 - 17.00) via the Cromwell Green visitor’s entrance. There is no admission fee and complimentary booklets to accompany the Exhibition are available.

The Project Team is especially grateful to our interns, Lizzie, Katherine and Liviu, for all their hard work in fielding public responses to the Project Exhibition, and for further explaining the history of St Stephen’s Chapel to visitors. We all wish them well with their future academic studies.