St Stephen’s Chapel and the Reformed House of Commons

My research examines the houses of parliament in the aftermath of the 1834 fire, which destroyed the old Palace of Westminster. In particular, I am intereste... Read more 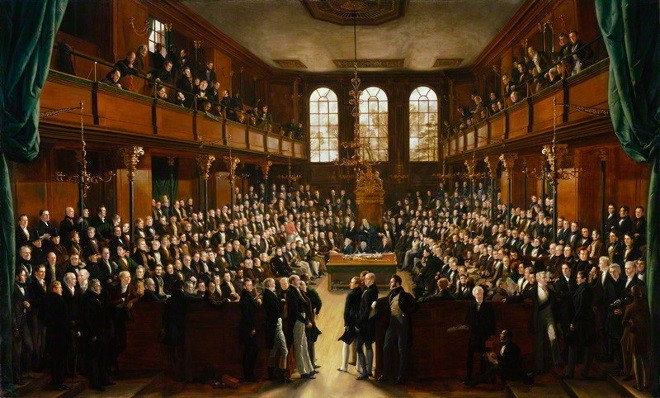 Sir George Hayter’s painting of the Reformed Commons depicts the first session of parliament elected after the Great Reform Act of 1832. It is also one of the last representations of the interior of St Stephen’s Chapel before its destruction in 1834. George Hayter was born in 1792, son of Charles Hayter, a popular portrait miniaturist. George Hayter’s skill ensured he secured royal patronage, becoming a favourite of Princess Charlotte. After her death, Hayter retained his royal connections, producing a scene from the trial of Queen Caroline in 1820 and in 1837, he became Queen Victoria’s court portraitist.

The Reformed House of Commons was an unusual undertaking. The work was not commissioned and much Hayter’s time was taken up with drawing portraits of all the individuals featured in the painting. He would then offer the oil portraits to the sitters, for the price of ten guineas each. Hayter aimed to commemorate what he believed to be an important moment in British history; the first meeting of a reformed parliament, representing an increased electorate.

Following the Reform Act, St Stephen’s was home to 658 MPs although there was only enough room for around 300 MPs on the floor of the House. Hayter replicated the cramped surroundings, only featuring 376 members of the House of Commons, just over half the total number of MPs. The painting contains many of the major political figures of the day, including Peel, Lord John Russell and Palmerston. At the bar of the House, major figures from the Lords also appear to be listening to the debate, including Prime Minister Earl Grey and the Duke of Wellington.

Despite painting individuals in meticulous detail, Hayter’s depiction of St Stephen’s was inaccurate. In reality, St Stephen’s was cramped, crowded and poorly ventilated, leading one commentator to refer to the chamber as the “second edition of the Black hole of Calcutta”. Despite calls for the building to be replaced, there were no immediate plans to do so in 1833. St Stephen’s Chapel was amongst the chambers that were destroyed by fire in 1834, and the Commons moved into the former Lords chamber, until their new, purpose built chamber was completed in 1852.

Hayter’s sizable canvas of The Reformed House of Commons (213 inches × 136¼ inches) took ten years to complete and another fifteen to sell. It was eventually purchased by the Conservative government in 1858, for the newly founded National Portrait Gallery, where it remains on display.