My research focuses on Gothic art and architecture of the thirteenth and fourteenth centuries in England and France. I am currently completing a PhD provisi... Read more 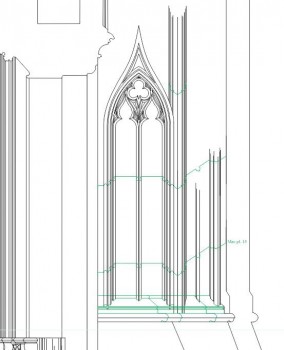 In many ways, the history of St Stephen’s Chapel on paper is equally fascinating to that of the chapel it purported to record and reconstruct. Whether in terms of the politics of building restoration and Napoleonic-era national pride exhibited in John Carter’s diverse drawings and published engravings (c. 1760-95); the bitterly contested intellectual property of John Thomas Smith’s Antiquities of Westminster (published 1807); John Britton and Edward Brayley’s interest in reforming English architecture through bringing St Stephen’s to the attention of the newly-formed Institute of British Architects in their Ancient Palace of Westminster (1836), or Frederick Mackenzie’s dramatic and sweeping reconstruction on government orders published 1844, this history was continually punctuated the petty politics of antiquarianism. It is through this lens, one which was to have a direct impact on the chapel’s depiction, that art historians’ experience of the chapel has been continuously mediated up to this point, entirely reliant as we are on antiquarian records for continued research. Following the building’s near-complete destruction in 1834 and subsequent total replacement under Charles and Edmund Barry, no other sources are available to us.

It was with these thoughts in mind that I decided to follow in the footsteps of my antiquarian predecessors by producing my own reconstruction drawings. Wary of the pitfalls of restoration, not least the beguiling desire to restore speculatively beyond the factual evidence, my aim was to use drawing in a different way: as a dynamic tool for unpicking the chapel’s original physical presence. The starting point was therefore an in-depth study of existing drawings and texts from the sixteenth to nineteenth centuries, broadening the range as far as possible from the canonical originals in order to assess the probability of presence and absence in all the chapel’s features. Comparing authorities and resolving conflicts through close attention, systematic comparison and a smattering of common sense, this allowed me to assemble a comprehensive picture of the nature and reliability of the antiquarian source materials.

The next inevitable phase is that of producing the drawings themselves. By tracing directly from drawings and engravings utilising CAD software, I was able to maintain scales as I went and composit elements from many source materials together. In order to avoid questions of construction sequence, my chosen date of depiction was the chapel’s completion in 1363 with the intent of showing its complete structural state at that point. These were not to be sequential reconstructions, but indications of the building’s final state. Where information was not available, gaps have been deliberately left as this is a project aiming at accuracy rather than idealism or aesthetic appeal. Continually updated as new information becomes available, these drawings can act as a dynamic tool for continued research into the chapel’s original state, further informing my wider research interests.