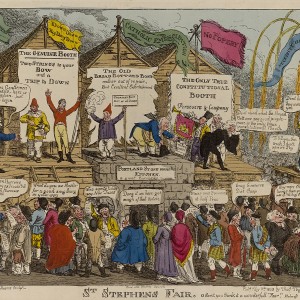 Old Corruption was a system by which the elite benefited from selling of offices, sinecures (jobs which paid a salary for little or no work) and pensions. Patrons also influenced the small electorate, often through monetary incentives, to secure election for their friends and allies to parliament.

This led to accusations that the whole parliamentary system was rotten, fuelling calls for reform. This image demonstrates the means and methods of corruption that were associated with St Stephen's Chapel by the nineteenth century.

Before the Reform Act of 1832, St Stephen's was a visual symbol of a corrupt political system. Visitors were dismayed by the conduct of members within the chamber. One visitor stated that "it is not at all uncommon to see a member lying stretched out on one of the benches, while others are debating. Some crack nuts, others eat oranges, or whatever else is in season."

James Boswell, another visitor, declared that upon seeing the site "my respect for it was greatly abated by seeing that it was such a tumultuous scene."