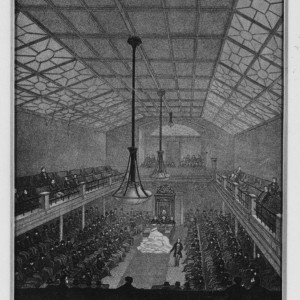 After the 1834 fire, the Houses of Parliament needed temporary chambers to allow them to meet whilst designs for the new Palace of Westminster were prepared. Architect Robert Smirke decided to repair the former House of Lords and turn it into a temporary chamber for the Commons, while the Lords moved into the former Painted Chamber.

The temporary House of Commons was ready for use by 18 February 1835, just four months after the fire. As this engraving shows, it closely followed the layout of the old chamber, although it was slightly larger. Soon after the chamber was completed, MPs requested changes; these included the introduction of a Ladies’ Gallery, which had never existed in the old St Stephen’s.