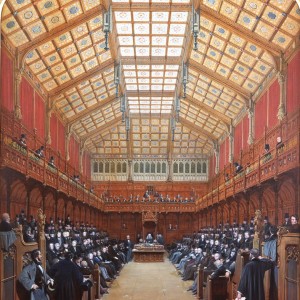 Following the trial sittings in May 1850, MPs forced Barry to widen the galleries and install a lower ceiling. Barry was unhappy about these changes and apparently refused to set foot in the new Commons chamber after it was completed. The MPs were satisfied, however, and the new House was finally brought into use in 1852.

Barry’s House of Commons was destroyed by enemy action during the night of 10/11 May 1941. The Commons took over the Lords chamber for the remainder of the war, with the Lords meeting in the Robing Room.