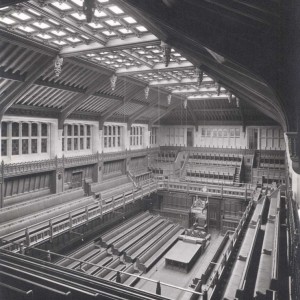 After the Second World War, Sir Giles Gilbert Scott was commissioned to rebuild the destroyed House of Commons. It was slightly plainer than Barry’s version, reflecting both the financial stringency of the time, and the 20th-century preference for a more minimalist aesthetic. Nevertheless, it faithfully reproduced the layout of Barry’s chamber – and, indirectly, features of St Stephen’s Chapel.

In the century after the demise of St Stephen’s, many countries in the Commonwealth had set up their own parliaments, modelled on the Westminster system; thus, the spirit of St Stephens lives on well beyond Westminster. To commemorate these international connections, many Commonwealth countries donated items of furniture for use in Scott’s chamber.