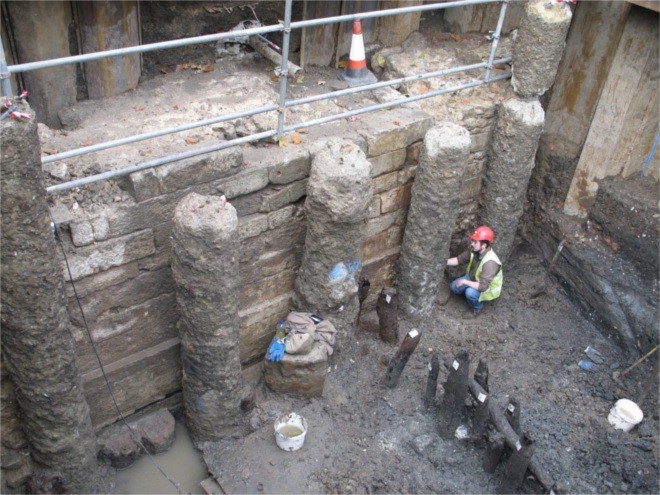 The construction of a new basement transformer room to the south of the Palace in Black Rod’s Garden has unearthed some exciting discoveries made by Museum of London Archaeology. The oldest finds were timber beams from a waterfront structure dating from before the thirteenth century, but the most significant survival was a stone river-wall dating from about 1500 which stands about three metres or nine feet high.

The wall is made from carefully dressed Kentish Ragstone blocks of substantial size, which remain in remarkably good condition. The wall follows the approximate eastern fronts to the buildings of the medieval Palace, such as St Stephen’s Chapel and the king’s private chamber, known as the Painted Chamber. Gardens were later extended out into the Thames and the old wall-line was lost and remained hidden until the current work. Luckily, the new concrete piles did not damage the old wall and it has been left in situ, recorded, and then re-covered using sand to protect it.

In front of this wall was found the remains of a timber revetment constructed from oak and elm piles and wattle hurdles which was probably contemporary with the wall; the posts followed the line of an inlet which once flowed into the Thames from the west. The wood was also in a good state of preservation following centuries of burial in the wet ground.

The main small finds from the excavation were pieces of patterned, medieval ‘Westminster’ floor tiles, so-called because they were first recognised in the Abbey and Chapter House nearby during the nineteenth century. It was this kind of tile which was used for inspiration by Augustus Welby Pugin when he designed the floor tiles of the Victorian Palace. An iron knife or dagger was discovered too, as well as what appears to be a sail needle.

A full post-excavation assessment was produced by Museum of London archaeologists in November 2015. 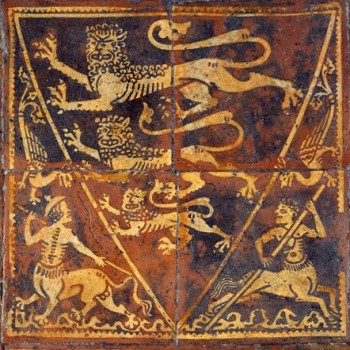 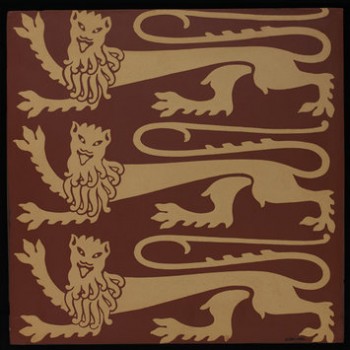